Pop Quiz: Do You Know Your Adrenals? 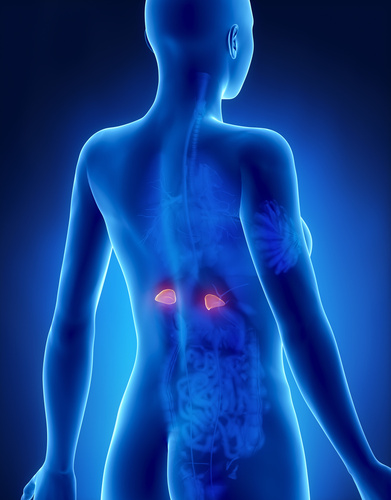 Sometimes, it’s easy to label feelings like tiredness, crankiness, and even chocolate cravings as part of “being a female.” But the truth is, you could be suffering from adrenal fatigue. So today, let’s get in touch with those little glands that we often neglect. They may be little, but they’re a big deal when it comes to your health and energy levels.

It’s time for a pop quiz…how well do you know your adrenals?

1. Where are your adrenal glands?

ANSWER: B – They’re just above each kidney

Everyone has a set of adrenal glands and they hang out just above each kidney. If you turn around and place your hands on your mid to lower back, you’d probably be hovering over your adrenal area. They are a little funny looking. The right side is in the shape of a triangle (kinda) and the left looks more like a half moon. They’re yellow and tend to go unnoticed by most people.

Here’s a quick breakdown of the adrenals:

Quick Breakdown of the Adrenals:

2. What do adrenal glands do?

Adrenals have a myriad of functions, but one of the most important is the production of adrenaline aka epinephrine. They also secrete the hormone that has the ability to raise blood pressure. Hormones are affected by your emotional state, physical wellbeing and psychological health. Adrenals regulate the energy production and storage and have the ability to impact immunity, heart function and even muscle tone. It’s crazy to think how little triangle and half moon shaped objects can have such powerful influence in our bodies!

When adrenals are functioning correctly, they meet a crisis such as an illness and release the correct hormone levels in order to help us deal with it effectively. If the adrenals aren’t working properly then insufficient amounts are released and we lapse into what is called adrenal fatigue.

3. Is adrenal fatigue a disease?

This is a trick question! In recent years there’s been a rise of epidemic proportions in cases of adrenal fatigue. The medical community doesn’t quite recognize it as a disease but as more and more doctors are seeing cases of it, it’s definitely causing quite a stir.

Another trick question! The answer is that there are a few different ways your adrenals can be affected, including: exposure to chemicals, recently ill, poor diet, lack of exercise, substance abuse, not getting enough sleep, increased stress, and emotional trauma.  When your adrenals are in over-drive, it can cause you to feel tired for no reason, have a decreased sex drive, and have a hard time bouncing back after sickness.

If you’re feeling overwhelmed at the possibility of having adrenal fatigue, take heart. One of the best ways to build your adrenals back up to healthy, functioning levels is to practice gentle pilates, and relax your mind with yoga. I’ve put together the Adrenal Reset Kit for you so you can wake up alert and energized, every morning! As a bonus, it includes a 1-hour presentation where I’ll teach you how stay effortlessly energetic at any age.

Reset Your Adrenals To Wake Up Alert and Energized…Every Morning!